Blabbermouth.net
SAINT ASONIA, the act led by ex-THREE DAYS GRACE frontman Adam Gontier and STAIND guitarist Mike Mushok, recently released a new single called "The Hunted". The song, which is accompanied by a lyric video, features a guest appearance by GODSMACK singer Sully Erna.Speaking to iHeartRadio about how he became involved with the track, Erna said (see video below): "Adam wasn't even in the band, I don't think, when me and Mike wrote that song. We wrote it a while back, and we wrote it for the 'Hansel & Gretel' movie. For whatever reason, it got submitted, but it didn't make the movie. And then, I guess, Mike shelfed it and then revisited it on this record. And the band liked it. And so they asked me to sing on it. I was touring in Europe at the time, but I did — I went into a studio and I cut the track. But when I re-listened to it, I didn't really love it again, so I started re-writing the lyrics and the melodies. And then I guess Adam got ahold of it, and then he went and tweaked some of the verse himself, so it became a real collaboration between me, Adam and Mike. But the song originally was written years ago between me and Mike."Asked if he was in the studio with Mike and Adam when he laid his vocals down on the track, Erna said: "I was the first time with Mike, but then when I revisited it, I was touring in Europe with GODSMACK, so they had set up a studio — somewhere in Germany, I think it was — and on my day off, I went in and re-cut the vocal.""The Hunted" is taken from SAINT ASONIA's upcoming second album, "Flawed Design", due out this this fall. The new disc follows up the band's self-titled 2015 debut, which featured the Top 10 radio tracks "Better Place" and "Let Me Live My Life".Gontier said about the new single: "'The Hunted' is a song about struggling to find your place in life. It's a solid representation of the direction SAINT ASONIA is headed. I'm excited to share this with the world. And it's an awesome bonus having Sully from GODSMACK guesting on it."Mushok added: "I'm very excited for everyone to get a taste of what the new SAINT ASONIA album is going to sound like and I think that having 'The Hunted' as our first single is a great representation of where the band is going." 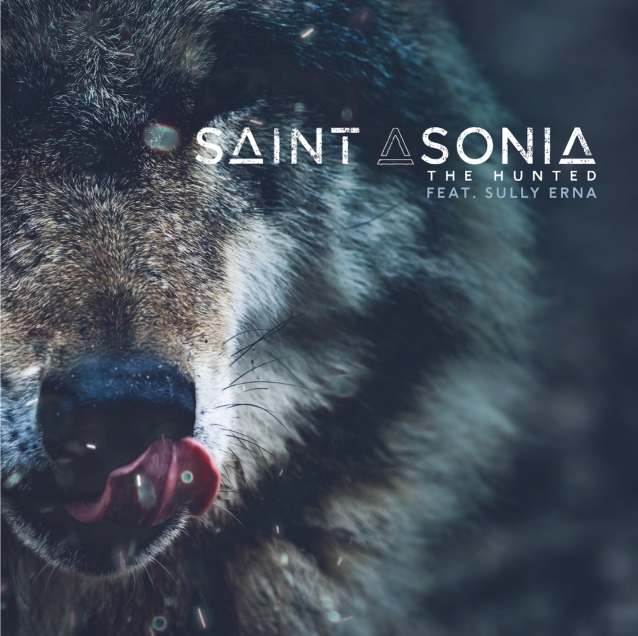